Thousands of people took to the streets of Manchester at the weekend to unite against dementia.

Participants, most of whom were walking in memory of – or to pay tribute to – a loved one affected by dementia, formed a sea of blue in their Memory Walk T-shirts as they made their way along the city’s waterfront.

From there, they snaked their way across some of the city’s iconic bridges and past the famous Imperial War Museum and Lowry Theatre.

Before the walk got underway the Piazza was a hive of activity as participants enjoyed a lively ‘zumba dance’ warm  up session – and the high spirits continued as medals were handed out as people crossed the finishing line.

Hazel Bayley,  Alzheimer’s Society Area Manager for the North West, said: “Dementia is now the UK’s biggest killer, with someone developing it every three minutes.

“I am so glad that thousands of people from across the region stepped out to improve the lives of people living with dementia. 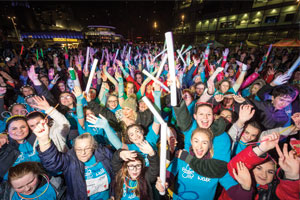 “Dementia devastates lives; it slowly strips people of their memories, relationships and identities.

“Alzheimer’s Society is committed to spending at least £150 million over the next decade on dementia research to improve care for people today and find a cure for tomorrow.

“I would like to say a huge thank you to everyone who has helped make this year’s first Ready Steady GLOW event such a brilliant success.”