How the elderly can benefit from using technology in relation to health?

In the UK, it’s estimated that around 45 million people use or own a smartphone. With most smartphone owners aged between 14 and 60, a large proportion of the elderly population are left behind when it comes to smart technology. In this article, we’ll take a look at the different ways the over 65’s can embrace smart technology to help their health.

As people get older, it’s inevitable that they have to visit medical professionals more frequently. Due to mobility issues, many elderly people find it challenging to access doctors surgeries and clinics. However, using technology in the form of an app on a smartphone, tablet or device, a feasible solution can be used to significantly aid this habitual problem.

Apps such as Push Doctor, or the NHS’s version, ‘GPathand’, allows you to book and undergo the appointment with your doctor or GP straight from your internet connected device. Online pharmacies are also a useful tool for this problem as patients, after receiving an online consultation with a doctor, can have their repeat prescriptions delivered right to their door. By using technology, the elderly population can regularly access the top healthcare, without having to worry about mobility issues. 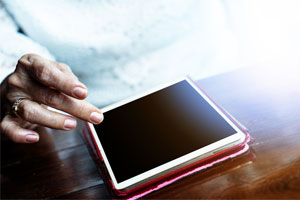 Wearable technology products such as the FitBit and other watches can collect data on heart rate, blood pressure, and the amount of exercise done in a day. Other smartwatch manufacturers have also created products that can aid people with medical conditions such as dementia - for instance, take Safelink’s smartwatch with it’s wearable GPS tracker, that alerts up to three smartphones when any unusual behaviour is detected.

Initially, some elderly people may struggle to use some of the items listed above, however, there are plenty of resources out there to help them grow accustomed to their new found technological friend. Take a look at this guide on Age Action, or alternatively, seek out services like Barclays digital eagles, that can help anyone become confident in using technology.