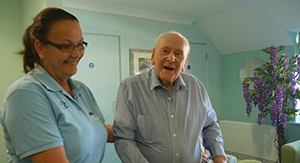 Thomas Timson was one of the first residents to arrive at the luxury Abbotswood Court care home when the purpose-built facility opened in Romsey in 2015. He made the decision to move following the passing of his beloved wife after 65 years of marriage. Having shared many cherished years together, her absence had a huge impact on Tom’s life and his love for singing became a neglected pastime. Even though his son lives nearby, living alone without someone to share his music with, was too big an adjustment.

The pair married in 1953 and were both proud to share their anniversary year with the Queen’s Coronation. A devoted husband, Tom nursed and tended to his wife for over two years before her passing. During this time Tom lost many opportunities to engage in his favourite passion, singing. A Hampshire man through and through, Tom was born in Compton, a small town just south of Winchester. He worked on the local railways as a Signalman for over 40 years.