The Alzheimer’s Show returns to Olympia London this week! 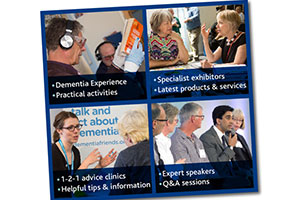 The Alzheimer’s Show is returning for its sixth year in 2018 and will be at Olympia London on Friday June 8 and Saturday June 9.  The UK’s leading event for people living with Alzheimer’s, dementia or memory loss, The Alzheimer’s Show brings help and hope to families and carers and welcomes the public and professionals.

The Alzheimer’s Show is invaluable for anyone concerned about memory loss or dementia. Dementia is now the leading cause of death in England and Wales and research from Saga Healthcare revealed that more people feared getting dementia than cancer. A survey of 9,000 people over 50 showed that 43% feared developing dementia, with women (often the main carers), 20% more likely to be worried about developing the condition than males.