How phone applications are revolutionising the healthcare industry

Phone apps and the internet are some of our best and most favourite tools for figuring out which medical ailment affects us, says health writer Ella Hendrix. Sadly, the information we read is only as reliable as the person writing it, so be advised to take what you read online with a pinch of salt. Yet, more and more men are living longer because they are checking their symptoms online instead of ignoring their symptoms completely. The internet and mobile apps are affecting the healthcare industry in far more ways than most people realise and, in some cases, apps are saving lives.

Staying in touch with the right people

You may remember the first websites that offered free SMS texts if you didn't mind giving your phone numbers up to spammers. Then, along came things like Skype and What’s App, and suddenly we have free communication that is lightning fast and more readily accessible than emails, and more disability friendly than phone calls. Such apps are nice for family members who want to stay in touch, and they are revolutionary for people who need intermittent care, from people with dementia who are having off-periods, to people with schizophrenia who need somebody to help walk them safely through an episode.

Some of the best ideas are the simplest

Apps that tell people when to take their pills are saving lives. These are not sophisticated apps like the ones that are used to check the oxygen content of your blood, they are organiser apps with alarms, but such apps are brilliant because they take the thought, concern, and worry out of taking pills correctly and on time. For example, for women on the pill apps are a convenience tool, for people with HIV they are saving lives.

The frustration of forgetting 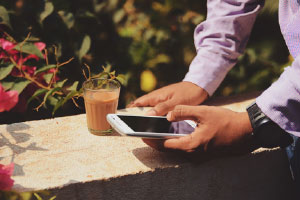 One of the most upsetting sides of dementia that sufferers experience is the frustration it causes because they have to account for the fact they cannot trust themselves. Mobile apps are helping dementia patients ease their frustration with repetitive organising apps where reminders pop up until they are deactivated, so a sufferer of dementia is forced to undertake a task. Dementia carers at Helping Hands state that it’s “a time of utilising mobile technology for daily tasks” and their clients have found that a correctly chosen organiser app can help with various daily prompts, and enables them to regain a little independence and dignity.

There are no studies that conclusively prove that such apps work, since people who invest their time in any activity are likely to get better at it - in other words, just because a person can remember a list of different shapes on an app, it doesn't mean they will remember which items they put on their grocery list. However, there are several tactile apps that are helping people regain hand-eye coordination. There are apps that teach children how to write by having them trace letters, and similarly themed apps are proving very useful for people trying to regain full use of their hands and fingers after a stroke. Plus, many tailor-made apps will chart a sufferer’s progress so that doctors may spend less time performing manual one-on-one tests.

Saving money in the healthcare industry

Having a programmer create a set of customised apps is easier than ever these days, and it is helping to save money in some areas of healthcare. The combination of stock databases and the easy dissemination of information through apps has helped streamline the supply chain in the pharmaceutical industry, and it has made legally-required due-diligence check-ups far easier (e.g. missing items are more quickly identified). There are also apps that test a patients timing, reflexes, auditory, visual and presumptive responses, which means doctors, specialists and nurses do not have to invest as much one-on-one time with patients in order to check their progress.

Conclusion – is technology a mixed bag?

There are downsides to new technology, such as the mess the Canadian’s socialised healthcare program has suffered because technology was ineptly integrated (both eHealth and its predecessor Smart Systems), yet in the UK there is an NHS system that embraces the Internet, intranets, and apps, and the NHS is doing just fine, (though the UK is 41x smaller Canada, which probably makes a difference).

The business world has also proved that a reliance on apps can somebody be foolish. For example, a number of businesses have commissioned their own apps to help run every aspect of their business, and then failed because staff members simply didn't commit to using the apps, or staff members cheated and enter whatever data makes them look good.

Simple ideas and simple apps are literally saving lives thanks to people taking their pills on time and patients being able to access carers quickly and around the clock, yet we should always temper our enthusiasm with the knowledge that time-tested methods lasted such a long time for good reason (i.e. new isn't always better).

The use of mobile devices in healthcare

Mobile devices are becoming an increasingly important tool within healthcare delivery. In fact, 4 out of 5 doctors make use of these devices as…

Online health educator, The Sound Doctor, is delighted to announce the development of their new App to help people live independently for longer.…