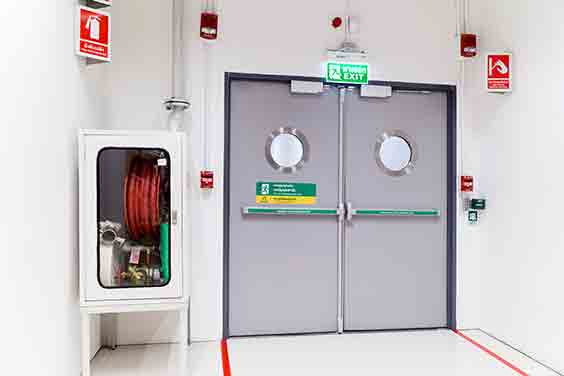 Fire Safety Week survey shows unsafe fire doors in homes and that their work place is at risk of serious fire. The results of the study were released in order to mark Fire Door safety week, which is now supported by the London Fire Brigade. It was revealed in the results that there are serious delusions over fire door safety, and a high popularity of unsafe practice.

Out of the current 1,000 current and former care home employees, three quarters stated in the survey that they believe that more can be done to prevent or manage a fire, and more than half of them stated that unsatisfactory action was taken as a result of preventing a fire in their work place. As well as this, three in five members of staff have already reported safety concerns with the majority of them having little to nothing changed.

47% of people who took the survey admitted that they didn't know what the role of a fire door was when it comes to keeping a fire contained for a specific amount of time, while over 80% of them admitted to deliberately propping a fire door open and defeating the purpose of the door.

According to Care Home Professional's online report, "One in five care workers incorrectly believed that painting a regular door with flame proof paint make it a legitimate fire door, and the same proportion stated that the gap between the fire door and the door frame did not matter. Additionally, three quarters (72%) said they had witnessed or were aware of fire doors being tampered with, including removing the door closer to make doors easier to open. As well as making the door closer redundant, when combined with other adjustments, this could leave the fire door unfit for purpose in the event of a fire."

the chief executive of the British Woodworking Federation, (the company which organises Fire Door Safety Week), Helen Hewitt stated that "We all need to feel protected inside buildings, and especially so when we are asleep. Care homes and other specialised housing provide a living place for some of the most vulnerable people in our communities. the companies and other operators that run and maintain them have a responsibility to ensure they residents' safety - and as an industry we need to continue to provide out expert support to ensure the correct specification, installation and ongoing maintenance of fire doors. We hope that through raising awareness during Fire Safety Week, lives will be saved through a reprisal of fire doors and safety arrangements in multiple occupancy buildings."