Affecting 15-20% of people aged 65+, MCI is a decline in cognitive functioning considered a transitional stage between normal ageing and dementia. In part, MCI develops when a person’s brain has less glucose available as a source of energy1, resulting in symptoms including memory loss, forgetfulness, and a decline in decision-making ability and judgment. 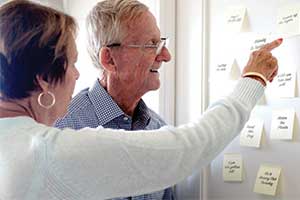 The six-month randomised controlled BENEFIC (Brain ENErgy, Functional Imaging and Cognition) trial investigated the role of ketones, which can be used by the brain as an alternative fuel source to glucose. The ground-breaking results established for the first time that the BrainXpert Energy Complex compound, rich in ketogenic medium chain triglycerides (kMCT) and milk protein, can be utilized as an alternative brain energy source for people living with MCI. This signals a major breakthrough for the MCI community that, until now, has had no available treatments2.

Trial results confirmed that an intervention with this compound clinically demonstrated a doubling of the ketones used by the brain, thereby significantly reducing the brain energy deficit caused by impaired brain glucose metabolism. Participants also showed a statistically significant reduction in MCI symptoms: they had improved memory; improved word recall; were able to think quicker; and were more able to multi-task versus participants that were given a placebo.

BENEFIC trial principal investigator Professor Stephen Cunnane, from the University of Sherbrooke, said: “Identifying significant improvement in cognitive function in patients with MCI is an exciting development that gives us great motivation to stay on this research track. This is only the beginning and the hope is that new innovations can be found to not just boost brain function, but to slow down progression to Alzheimer’s disease and other forms of cognitive decline linked to ageing. These results should significantly improve the quality of life for people living with Mild Cognitive Impairment.”

Cognitive function was assessed at baseline and after six months of intervention. Episodic memory was evaluated using the French version of the 16-item free and cued word learning and recall test and the Brief Visual Memory Test-Revised (BVMT-R). For executive function, attention and processing speed, the Trail Making test, Stroop Colour and Word Interference test (Stroop), and the Verbal Fluency (VF) tests from the Delis-Kaplan Executive Function System were used, respectively. The Boston Naming Test (TNT) was used for the assessment of language ability.

For more information on the study, please visit www.nestlehealthscience.com/BrainXpert

Training and dispensing services for your residents with stoma, sheath and/or continence care needs

Moorland Surgical Supplies is a long established, specialist dispenser of all continence, urology and stoma products that are available on…