Over the next three decades, the number of older persons worldwide is projected to double, reaching more than 1.5 billion by 2050.  This year, the International Day of Older Persons aims to raise awareness of the special health needs of older persons and of their contributions to their own health and to the functioning of the societies in which they live.

Tarkett are dedicated to designing inclusive elderly care environments which is why we partnered with the creators of VR-EP, a virtual reality tool endorsed by the leading experts in dementia-friendly design.

Designing for dementia: how inclusive design can transform lives

Dementia has been described as one of the most significant health crises of the 21st century. In the absence of a cure and with an ageing population, we need to design environments that take into account how people with dementia behave and see the world.

Those living with dementia often feel a strong urge to wander, which can cause problems if they become disorientated and forget where they are. Nurses list “wandering” in their top five challenges. However, it is possible to design spaces in a way that works with this urge rather than trying to subdue it. Designing a care home with a focal point that gives the wandering resident the sense that they’re going somewhere, an area with resources like books and a television, or a communal area that encourages socialising. The key point is that the space feels different from the space they’ve just left and offers some kind of stimulation.

Signposting is a powerful tool for dealing with possible disorientation during wandering. Simple, well-lit and easy to read signs with recognisable objects will aid orientation.

Being and feeling safe

It’s obviously essential for any space used by vulnerable people to be safe, but to encourage people to stay mobile, you also need to think about their perception of safety. Someone designing the flooring for a care home would probably think about factors such as the evenness of surfaces, wheelchair access and avoiding trip hazards such as clutter or rugs. However, a person with dementia might still view a perfectly level, clear floor as a hazard and refuse to step onto it. Why? Tarkett’s extensive research into how people with dementia view their surroundings has found that colour contrasts are much more important than most of us realise. People with dementia tend to have trouble with three-dimensional vision, which means that they use changes in colour to fill in the spatial cues they’re missing. (Think about how artists use colour to create the illusion of depth or distance in a two-dimensional painting.) A contrast in colour on a floor could be perceived as a change in depth, making the floor seem uneven and unsafe to walk on.

Likewise, if colour contrasts are missing from your design, the person with dementia will miss important information. For example, if a door is painted the same colour as surrounding walls, they may not notice the door at all and may not be able to leave the room unaided.

It’s hard to understand how someone could miss a door that’s right in front of them, or feel anxiety over walking on a perfectly level floor. But if we are to design spaces that work for vulnerable and neurodiverse people, we need to try. That’s why Tarkett has adopted a virtual reality (VR) tool that allows professionals, including interior designers, to see the world through the eyes of a person living with dementia. This “virtual reality empathy platform” is the world’s first and only evidence-based dementia filter and through it you’ll see scary changes in depth that make a floor seem dangerous to walk on. Knowing what the users of your space actually see will allow you to design dementia friendly facilities. 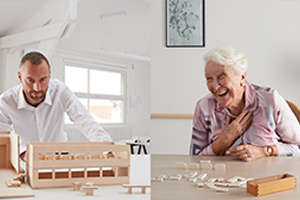 The use of visual cues such as painting a door and its frame in contrasting colours will do a lot to help a person with dementia move around with ease. But as well as selecting appropriate levels of colour contrast, it is also important to choose the right colours and textures. A black or dark grey floor could be perceived by someone with dementia as an empty space like a black hole. Asking them to step onto it is like asking someone to walk off a cliff. Likewise, a very shiny floor could look like water. Visual cues can also be used to discourage unsafe behaviour; if there is a specific door that you don’t want accessed, painting it the exact same colour as the doorframe and surrounding walls will make it less noticeable.

Good lighting is one of the most important tools for making a space dementia-friendly.  Maximising access to natural light will help to remove the shadows that might be perceived as a danger and it will also help people with dementia to regulate their body clock, which is an increasing problem as the condition progresses. Good natural light in the day combined with the use of blackout blinds at night helps to regulate the body’s sleep-wake cycle as well as providing obvious visual cues about whether it’s night or day.

If there isn’t as much daylight as you might wish, the light reflectance value (LRV) of surfaces becomes even more important. Most older people have some sight impairment but also difficulty with glare, so an LRV of between 10% and 40% is perfect for floors. Walls should have a significantly different LRV so that people with poor 3D perception can easily tell where the floor ends and the wall begins. This gives people the confidence to move through the space without fear.

Of course, it’s not just about sight. A truly dementia-friendly environment is designed with consideration for all the senses. People with dementia get more easily overwhelmed by sensory stimulation of all kinds. They might find it harder to pick out speech over background noise, or they might find sudden noises frightening and confusing. Some research shows that removing unnecessary noise can reduce aggressive behaviour and even encourage people with dementia to eat more.

Family members often raise concerns about the unwelcome weight loss, even to the point of malnutrition their loved ones sustain. It’s surprising to think that this could be fixed with better interior design, but the evidence suggests that it is possible. The crashing around and loud talking that comes at mealtimes can put residents of their food, it makes sense that removing these distractions will help them to eat better. Obvious changes include switching off televisions that aren’t being watched and encouraging food workers to handle cutlery and crockery more quietly. But flooring and soft furnishings can also make a huge difference by absorbing noise rather than magnifying clatter.

Apart from the natural desire to treat people with kindness, there are medical reasons for creating more dementia-friendly spaces. Many European countries have a problem with over-prescribing or prescribing inappropriate drugs to people with dementia, particularly anti-psychotic drugs. Only a small proportion of people with dementia receive any clinical benefit from anti-psychotics, and we know that over-prescription of these drugs is causing additional deaths. They remain in use because they’re seen as the best way to manage the difficult behaviour that comes with dementia: aggression, shouting, wandering and so on. What if this behaviour could be managed better through more dementia-friendly spaces? There is hard evidence to show that when people with dementia feel in control of their environment and perceived threats are removed, the problematic behaviour is drastically reduced.

Nobody is stating that interior design will stop all of the challenges posed by living with dementia, but when a space is designed with people’s specific needs in mind, along with knowledge of how they perceive the world, a lot of the stressors can be removed. The ultimate goal of all dementia-friendly design is to enable people with dementia to live the fullest possible lives.

Training and dispensing services for your residents with stoma, sheath and/or continence care needs

Moorland Surgical Supplies is a long established, specialist dispenser of all continence, urology and stoma products that are available on…