NEW STARTER COMES TO THE RESCUE OF AN ELDERLY PATIENT

Only 12 days in her new role, new starter Lilly’s responsibility to assess patients after their discharge from hospital quickly went from a routine task, to that of a life saving situation when she was met at the patient’s home with panic and plumes of toxic smoke.

“Mrs Frapwell had just been discharged from hospital after complications with her diabetes. My role was to support her through the transition of leaving hospital and regaining her confidence and independence at home again. As soon as I rang the intercom I knew there was a problem. I couldn’t get to her quick enough; thankfully she was outside her flat but very distressed that she couldn’t stop the toxic smoke from developing. 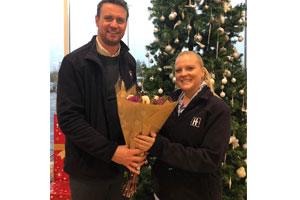 “I moved her well away towards an open window where she could breath in fresh air, and then I went back to the flat. I could see an electric kettle on the electric hob, which had been switched on. I just turned the hob off then found the cut-off switch for the electrics before opening the windows as wide as I could. It must have taken me minutes to act; thankfully the fire brigade were quick to take over. The chocolates I received from Mrs Frapwell’s family as a thank you were absolutely gorgeous, but for me it was a natural response and I’d do it again to make sure any one of our patients were safe.”

Mrs Frapwell said that she was very happy Lilly was at her home when she was as she didn’t know what would happen stating Hilton Nursing Partners could not have been better and the support she received was fantastic.

Ann Taylor, CEO at Hilton Nursing Partners says: “We are incredibly proud of Lilly, her quick thinking kept our patient safe, and prevented the fire from progressing further. I can’t praise her selfless actions enough, without giving her bravery a second thought her only concern was to make sure Mrs Frapwell wasn’t hurt or upset by the incident  – what a star.”

100% focused on getting patients out of hospital and recovering in their own homes. Working with the NHS and Social Care Commissioners Hilton Nursing Partners successfully deliver safe, timely and supportive hospital discharges, patient assessments and patient recovery programmes via nurses, therapists and nurse led personal nursing assistants with a proven track record in freeing hospital beds, as well as reducing re-admissions and on-going social services support.