69-year-old John Holt who is living with dementia has been inspired to write a song about his experiences of the condition. The song ‘The Secret D’ has been released on iTunes with all proceeds going to Alzheimer’s Society.

John, who lives in Penwortham, attends Alzheimer’s Society’s Singing for the Brain in Penwortham, and is also a member of the Skylarks Community Choir. As a former musician in a brass band, John penned the lyrics and contacted ‘The Songwriting Charity’, set up by Nathan Timothy, who agreed to write the music and produce it.

John explains: “I wanted to write something that explains what happens when you get dementia and how if you keep doing activities it can genuinely help you. I hope the lyrics communicate how I feel I live with the illness and emphasise that there are many things we can still do and learn. We don’t have to just sit back and silently accept the inevitable.

‘I try to be as active as possible and organise lots of new things and I really believe that helps me to deal with this condition. I wanted to share that message with other people with dementia, and, at the same time, raise funds for Alzheimer’s Society, as I feel the charity has really helped me. 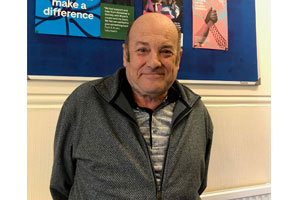 ‘I feel my confidence has grown since attending these singing groups. I do a solo every week, and prior to getting dementia, I would never have stood up and sung. Now I have written a song and sold 200 copies of the CD already.”

Nathan Timothy from The Songwriting Charity based in Kent said: “John contacted me after reading online about my work and I was honoured when he asked me if I could help him with this fantastic and unique project. My own father has been diagnosed with dementia so I am fully aware of the impact it has on the lives of so many people.”

The lead vocals are sung by 22 year-old Lewis Hampson who studies music at UCLan. Lewis recently lost his grandfather to dementia and so was keen to be involved as it had a personal significance for him.

Lewis Hampson says: “I met John at a singing for the brain group having been persuaded to go along by mum who works for Alzheimer’s Society. Having lost my grandad last year, who lived with dementia, I felt humbled when I was asked to sing lead vocals on the song John had wrote. It made me think I was giving something back to the society who had supported him and my nan. I am in my final year at UClan studying Musical Theatre so singing is a great passion of mine. Being part of this project was my absolute pleasure.”

A small group from Skylarks community choir (including John) were also involved in singing on the recording.

Jane Swarbrick, who leads Alzheimer’s Society’s Singing for the Brain group and runs Skylark Community choir said: “It’s amazing what John has achieved by writing this song and selling 200 copies of the CD already. I think it’s truly inspirational that so many people have come together to support and help make this happen for John.

‘I think John echoes an important message that people can still live well with dementia and keeping active and having interests helps many people with dementia.

‘Music is also so important for people with dementia. Even when many memories are hard to retrieve, music can sometimes still be recalled - if only for a short while. Singing for the Brain sessions help people living with dementia communicate, improving their mood and leaving them feeling good about themselves.’

‘Dementia devastates lives, but dementia won’t win. Until the day we find a cure we will be here for anyone affected by dementia, where they are, whatever they’re going through. We need more people like John and those who have supported him to join us now and unite against dementia.”

If you want to download the song please go to https://itunes.apple.com/gb/album/the-secret-d-single/1455634899

John is also writing a book called ‘From Birth to Dementia’ about his life.

From running your local 5K to trekking Mount Kilimanjaro and cycling from London to Paris to parachuting, Alzheimer's Society has a fantastic range of events both in the UK and abroad. Unite with us now at www.alzheimers.org.uk

Helping a loved one with dementia during lockdown

Dementia is an umbrella term for a host of memory loss symptoms. As dementia becomes more prevalent with age, many sufferers are also dealing with…

How can we take action against dementia using technology?

In the UK, someone develops dementia every three minutes, and the Alzheimer’s Society estimates that the number of people living alone with the…