Singing Brings Joy To Those Living With Dementia

In December 2018, I had the honour of bringing some festive cheer to a group of people living with dementia, and also their carers.

I began volunteering for Alzheimer’s Society back in May 2018. I didn’t really know what to expect but I had a very open mind, so I was accepting of anything that I would have to face. Ever since I began volunteering, I have been so thankful for the happiness and joy that it has brought into my life. Unfortunately I am unable to volunteer currently due to work commitments, but I really hope to be back in the near future.

Dementia affects thousands of people in the UK. I wanted to be a part of the charity that does amazing things for such a heart-breaking condition.

There’s nothing quite like the feeling of making someone smile. For whatever reason, whether you make a joke and everyone finds it amusing, or whether you do a good deed for someone and make them happy. There is nothing like that heart-warming feeling. This is why I looked forward to travelling every other week to see a group of wonderful people who were all there for the same reason. To have a good time. 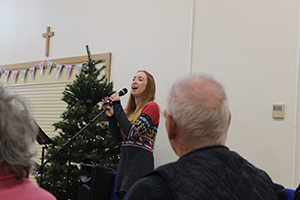 motivation. Specially trained facilitators deliver a varied programme of vocal, rhythmic and gentle physical exercise and dance, along with songs from different eras and styles.

“Even when many memories are hard to retrieve, music can sometimes still be recalled - if only for a short while. The sessions help people with dementia communicate improving their mood and leaving them feeling good about themselves.’

“ There are 16280 living in Lancashire but with the right support people can live well with the condition for a number of years.“

Soon after I began volunteering, I attended a class to become a ‘dementia friend’. I wanted to be able to recognise people who had dementia, and be able to help them in the best way possible. I received a badge that I could wear that would bring comfort to those living with dementia, to see that there was somebody who could understand them and help them when needed. I took it upon myself to do a little bit of research on the difficulties that are faced by someone with dementia, so that I was more aware of the condition itself and the challenges that are faced. I can’t even begin to imagine how frightening and lonely it must feel, to not understand what is happening, having your perception of the world distorted. This is why I care so much about Alzheimer’s Society. They are doing everything in their power to try and gain some control over this horrible disease. Here are some statistics from Alzheimer’s Society themselves:

Dementia devastates lives. Alzheimer’s Society research shows that 850,000 people in the UK have a form of dementia. By 2021, 1 million people will be living with the condition. This will soar to two million by 2051.

Dementia deaths are rising year on year and 225,000 will develop dementia this year – that’s one every three minutes.

Dementia costs the UK economy over £26 billion per year. This is the equivalent of more than £30,000 per person with dementia.

Alzheimer’s Society funds research into the cause, care, cure and prevention of all types of dementia and has committed to spend at least £150 million on research over the next decade. This includes a £50 million investment in theUK’s first dedicated Dementia Research Institute.

Until the day we find a cure, Alzheimer’s Society will be here for anyone affected by dementia – wherever they are, whatever they’re going through. Everything we do is informed and inspired by them. 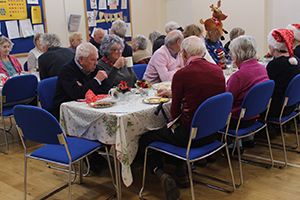 Let’s take on dementia together. Volunteer. Donate. Campaign for change. Whatever you do, unite with us against dementia.

Alzheimer’s Society relies voluntary donations to continue our vital work. You can donate now by calling 0330 333 0804 or visiting alzheimers.org.uk.

Alzheimer’s Society provides a National Dementia Helpline, the number is 0300 222 11 22 or visit alzheimers.org.uk

Going back to sing for Christmas was the most wonderful opportunity, and I would do it every day if I could. Many of them were singing along to all the Christmas carols and their favourite musicals. It was so lovely to witness so much happiness. I’m really grateful that I’ve had the chance to be a part of an amazing charity. Even though I can’t go back at the moment, I will certainly be back to give my support and offer as much help as I can. I’ve been greatly inspired by the lives that these people have led, and even though they have been hit by the hardest challenges, they still have that spark that makes them who they are.

I hope that this has made an impact on how important it is to offer support and help to charity. Whatever charity you support, you will always be appreciated. In my honest opinion, volunteering is the best thing you can do as a young person. It opens your eyes to the world around you and helps you to become more compassionate towards those in need. It has honestly changed my life for the better, and I would love to think that it could change someone else’s too.