The event was organised specifically for Teesside’s elderly, with stalls and talks from Ageing Better Middlesbrough and Cleveland Police as well as members of the IDC.

Residents from The Gables Care Home, in Middlesbrough, were among the guests, who were also treated to craft activities and puzzles during the lunch.

Resident Ivy Artly said: “I have never eaten pizza before but it was nice.

“I liked to talk to the different people that were there and I really enjoyed the chocolate donuts for pudding.” 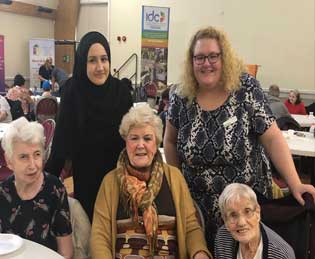 Emma Myers, activities coordinator at The Gables, said: “The organisers from the IDC were so helpful and attentive of the elderly people that were at the lunch.

“Volunteers from the Muslim community shared their knowledge about Islam and discussed aspects or the Koran.”

Representatives from Big Lottery funded programme Ageing Better Middlesbrough talked about their work to reduce loneliness and isolation for people who are aged over 50 in the city.

The programme will be bringing new activities and visitors to The Gables Care Home, on Highfield Road, in future.

While officers from Cleveland Police spoke about community safety, including how events such as the IDC lunch can help reduce hate crimes by bringing the community together.

Naaila Rehman, organiser of the IDC community lunch, said: “I would like to thank Emma from The Gables for coming along to the elderly community lunch organised by Islamic Diversity Center.

“It was a pleasure to have them all there and we look forwards to seeing them all at the next lunch.”