A new Dorset care home bed finding website is spreading Christmas cheer to those who are lonely this Christmas.

Care Home Bed Finder (CHBF), which is based in Bournemouth, has made a commitment to help lonely elderly people this December, following its November support for the Royal British Legion's Poppy Appeal.

It has teamed up with local care home providers, social services and domiciliary care providers throughout the county, and aims to accommodate as many guests as possible who would otherwise be spending Christmas alone, perhaps due to bereavement, poor health, increasing age or distant family.

The government has recognised loneliness as one of the main challenges faced by British society. GPs in England will be able to refer patients experiencing loneliness to community activities and voluntary services by 2023.

Managing Director at CHBF, Malcolm Whitham, said: "The opportunity to enjoy festive fare and spend quality time with people of a similar age and life experiences will hopefully lead to making new friends. 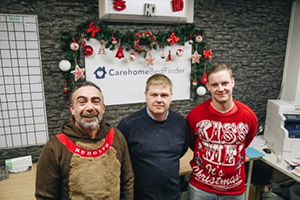 "We are focusing on Dorset this year, but plan to officially launch it as a charity early in 2019 and, by next Christmas, roll it out across the country."

Several care homes are already involved and actively seeking elderly guests to invite. Once relevant risk assessments have been completed and any special dietary or care requirements established, each guest will be matched with a home and a suitably Christmassy invitation dispatched.

CHBF is also contacting taxi companies to request assistance with transporting to and from homes and plans to ensure guests receive a present to open on the day.

"Organising this involves a huge amount of coordination," Malcolm added, "but it is something we feel strongly about because it fits our company ethos of supporting those in care, as well as the wider industry.

"Not only will someone enjoy a special Christmas Day, but it will also give people a look at life in a care home and perhaps break down preconceived ideas. We hope a relationship will grow between our guests and the homes, with future visits built upon these links."

•         More than nine million people in the UK - almost a fifth of the population - say they are always or often lonely but almost two-thirds feel uncomfortable admitting it (British Red Cross and Co-Op, 2016).