A care provider based in the Ribble Valley has been in touch with his first The Silver Line ‘telephone friend’, after volunteering with the helpline in a bid to help combat loneliness.

Gary Derbyshire, partner at Promedica24, wanted to do more for The Silver Line after it was chosen as the live in care provider’s charity of the year.

The Silver Line provides information, friendship and advice to people aged 55 and over, open 24 hours a day, every day of the year.

Gary, after completing his The Silver Line training and becoming a Telephone Friend, has recently made his first phone calls and said it is “one of the very best things” he has ever done.

His weekly calls are with a gentleman who relies mainly on his cat to keep him company. Gary speaks with him every Monday evening for at least 30 minutes and says, “I love knowing that I’m doing something very worthwhile, especially when he tells me how much he looks forward to the calls and how much difference it makes to his week.”

Gary added: “The problem of loneliness and isolation resonates so much when I hear my Telephone Friend say that he is so glad he knows my call is coming as he would hate something bad to happen and nobody to know about this.”

Since its launch, The Silver Line Helpline has received over 1.4 million calls from lonely and isolated people, with 53% of callers saying they have literally no-one else to speak to. Over 3,000 volunteers make regular weekly friendship calls to older people.
Gary regularly volunteers in the community. He is a member of the Royal Voluntary Service and has recently helped a lady to her hospital appointments as she has no family to support her. Gary added: “The lady I support 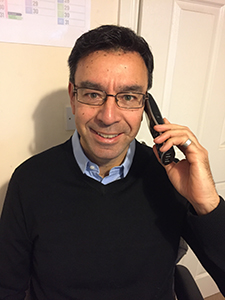 is recovering from cancer and is feeling extremely vulnerable, without my help she would really struggle.

“It doesn’t take much out of my busy schedule to offer up a few hours now and then. If a lot did a little, then so many vulnerable would benefit. I am just playing my small part.”

Promedica24’s partners promote and fundraise for the organisation, which relies entirely on voluntary donations to provide support and a befriending service to older people.

Gary added: “Helping to reduce loneliness in communities is one of our visions at Promedica24 and we feel strongly about supporting this very worthwhile charity who share our values.”

According to Age UK, 1.2 million people in England are chronically lonely, making it a much talked about issue across the UK.

Darren Housden, Head of Sales, added: “At Promedica24 we fully recognise the terrible affect loneliness can have on people which is exactly why we fully endorse the great work undertaken by The Silver Line charity.  It’s fantastic to see how Gary, as one of our regional partners, is contributing and we encourage this type of activity from all partners across our network.”