Since starting with Jackloc in January, I have been to a number care sites and acute mental patient hospitals, talking to directors and managers about window safety. The care market for Jackloc is a busy one, sites have 100+ windows and often many locations around the country.

Personally, I feel it is essential for me to understand through these meetings, what our client objectives are regarding window safety in their individual settings. I want to know why Jackloc products are selected, used and what the users and staff feel about their operation, and to establish if there is scope for better understanding or improvement.

In the care sector, guidelines for the use of window restrictors have been issued by the Department of Health to help reduce the risk of falls from windows. To achieve this, window restrictors must comply with BS EN 13126-5:2011 standards to withstand a force of up to 500N being applied to the window in a forced opening test.

In addition, an Estates and Facilities Alert was issued in 2014, following an incident where a fatality occurred when a care home resident fell from a window that had been restricted with a brand of restrictor that would now be considered as not fit for purpose. This alert suggested that within the health and care sector, window restrictors should be capable of withstanding forces in excess of 500N mentioned in the above BS EN standard, or that two restrictors may be required if one alone is considered in sufficient.

It’s also worth noting that it’s not just falls from windows which a restricted window can help reduce. If a vulnerable resident is able to leave a ground floor window, then they may wander without care in confusion. My own mother lived with Dementia in a care home seven years ago, and would often revert back to childhood saying that she wanted to go outside to play on the swing. She had a ground floor room with a window that opened straight out to the garden, so would’ve been quite likely to try to use the window had she been alone and the window had the ability to open.

So, in a market where restrictors are recommended by the Department of Health, what more can a window restrictor manufacturer do? With an already captive market, will waving a few restrictors around mean that people will come flocking to purchase them?

In a competitive market it is key to stand out and be present, but what is most important is not preaching to the converted – there’s clearly a requirement for restrictors in this environment; but more importantly talking about HOW to maintain them properly and that’s where relationships with clients is essential.

In this market, the environment, testing and maintenance are the some of the most important areas to consider. Installation of window restrictors are 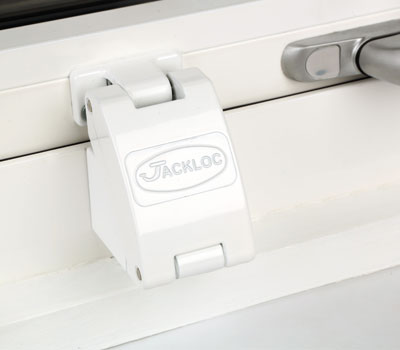 included in the guidelines, however, they need to be regularly maintained and assessed. Just having restrictors in place doesn’t mean that they will remain working effectively, only regular testing and updating, if required, will achieve this aim.

During meetings with care providers, I want to create an open dialogue to listen to their needs and identify what The Jackloc Company can bring to make things work as well as they can, and to provide peace of mind to resident’s families and care providers on an on-going basis.

Organising site visits and risk assessments takes time out of everyone’s day, but it’s important to have a regular maintenance plan in place to ensure that the restrictors are doing their job. Regular wear to both the window and the restrictor will occur over time, and the window opening can flex and widen when under that pressure.

Jackloc are hoping, to shortly be in a position to announce a partnership agreement that will provide a network of skilled installers and technicians who will be able to fit new Jackloc products. They will also be able to test window restrictors that are already installed, to ensure they are still achieving pass levels under load test. This will demonstrate to CQC assessors that maintenance regimes are being adequately adhered to.

We recently attended the NASHiCS Health and Safety Conference for Social Care and continued discussions directly with care providers on how to improve window safety. At the event we demonstrated our folding restrictor, which can hold a force of 4800 Newtons, or 74 stone. In fact, under test conditions the window failed before the restrictor, which remained intact still attached to what was left of the window frame.

We built the folding restrictor intentionally for the care market as it’s the strongest available. Since joining Jackloc earlier this year, I’ve been incredibly impressed with it. It’s been very well received by the trade and customers alike and we have big plans to promote the product over the Autumn.

If you would like to hear more about our maintenance plans and see the folding restrictor demonstrated in action, then let’s arrange a meeting to discuss how we can work together and how Jackloc can help with your window safety requirements.

Medical oxygen fires: how better safety can save lives

There is a need for more training and education around the risk of medical oxygen fires, explains Richard Radford, Managing Director of medical…

Leading window restrictor company Jackloc, announce the launch of the strongest restrictor in the market, the Titan by Jackloc ®…

4 top tips for electrical appliance safety in your care home